How To Draw A Monkey

Isn’t it interesting why many of us are so eager to learn how to draw a monkey?
I am going to show you a few deceptively simple and easy-to-draw steps in a monkey drawing process.

Using this technique, you can draw virtually any kind of animal, human figure, or other object.

First, observe the picture carefully and try to see how each body part consists of imaginary circles and ellipses. Don't stare too long at this monkey's face because it looks pretty dumb silly...haha. 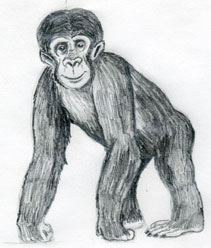 Begin with drawing circles and ellipses representing each part of the body.

Notice that the circles are not exact, and that is perfectly alright here. We will correct this later. Start drawing circles from the head if possible.

Then draw a smaller circle representing the mouth of a monkey.

It is also very helpful to draw a central line across the head and the mouth to help you to draw the eyes and the nose of a monkey.

Erase excess lines from the previous initial circle-and-ellipse drawing. Choose which lines should remain and which you erase.

At this stage, you have already learned how to draw a monkey? Did you notice that?

Yes, you have a basic balanced body outline, which is excellent. The rest is indeed very simple.

We will use the central axis-line crossing the head and the mouth. It will help us to draw the parts of the monkey’s face – the eyes, the nose, and the mouth.

Notice that the individuality and character of the face of any animal including humans are determined by the eyes, the nose, and the mouth.

When you have these three elements, you are virtually ready with the drawing.

So it is good to make just a little bit of special attention while you draw facial features.

You can begin to shade the area around the eyes and, point out the nose.

Maybe you would like to ask what kind of monkey is this? Let’s say, it resembles a little chimpanzee, because we often refer to a chimpanzee when sketching, draw or learning how to draw a monkey.

You did the basic and most important job. The face of your monkey drawing is now ready.

The rest of the drawing is the easiest part - shading and highlighting the body.

Relax it is simple. Just observe the pencil strokes on the pictures and make them similar.

It is OK to make mistakes while you are learning how to draw a monkey, so do not be disappointed if some of the pencil strokes won’t appear as you wish.

Draw the final outlines of the body, the hands, belly, back, and legs.

Erase all unnecessary pencil lines, remaining from the initial circles so that you have a ready-made body outline that looks like a real monkey.

To shade the body, it is good if you use HB or a softer pencil. Let’s assume that the monkey’s (chimpanzee’s) fur is of black or dark brown color, so the pencil will do the job just good.

Continue shading the body as you see in the picture. Notice that the pencil strokes are quite rough; I did not make any special attention to the exactness.

Just be careful with the direction of the strokes, especially around the elbows area and the part between the wrist and the bones of the fist that touches the ground.

Hands are slightly bent in those areas and it requires following it with the direction of strokes so it looks more natural.

When you draw fur animals be careful about the direction of pencil strokes.

You can emphasize-outline the contours of hands, the head, and other parts so that they will be easily distinguished among other dark parts.

The belly of the monkey is slightly lighter because it has fewer furs on it. Highlight a nipple on the chest too, that will give your picture a little realistic look.

You have learned the very basic steps of how to draw a monkey. I think you would agree that monkey drawing is not difficult at all, and I am sure you've already memorized the drawing steps.

If you repeat the whole drawing once more, it should not take you more than 5 to 10 minutes of your time, or maybe even less.

Did You Enjoy Drawing a Monkey?