How To Draw A Dolphin

Isn’t it strange? When I started to draw a dolphin I’ve got similar feeling like when I was drawing an elephant.

No doubt that both animals are highly intelligent. There is some special aura around them, even if you just draw them on paper.

Some people still have a tendency to compare dolphins with sharks although we all consciously understand that dolphins are totally different species.
My guess is that this is caused by similarity in shapes of the dorsal fin and pectoral fins (AKA: pectoral flippers)

If you could see only the tails of both; dolphins and sharks, the difference would become clear immediately.

When a shark swims below the water level you can easily see both dorsal and caudal fins at the same time.

Today we will draw a dolphin in one of its most natural motions - jumping.

Before you begin to draw this jumping dolphin take a little time and observe your object. 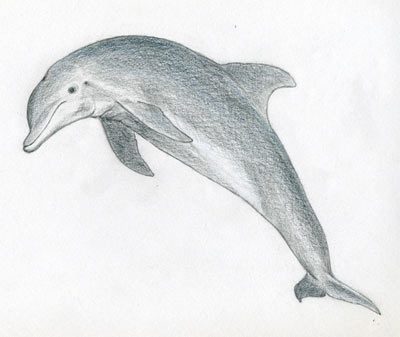 Comparing to the previous exercises of shark drawing. or fish drawing., dolphin drawing is a bit different.
I picked this jumping nice dolphin body on purpose to make the drawing process a little bit difficult and thus a good drawing exercise. 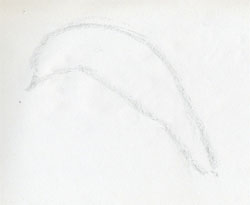 Hold your pencil loose or tilted and sketch the approximate outline contour of the dolphin’s body. 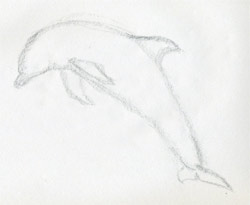 Sketch the fins in the following order: Start with the dorsal fin if possible and sketch the pectoral flippers as last.

I recommend this sequence because it helps you to capture the best total balance when you draw a dolphin.

Pay a little more attention to this important detail. We are drawing a bottle-nose dolphin. 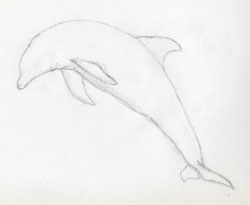 As every animal has its feature, what makes a dolphin look like a dolphin is mainly its rounded head, distinctive beak, and smiling expression.

We can call it the dolphin’s face. If you work diligently on this one detail, the rest of the dolphin drawing will be very easy.

On the contrary, if you cannot capture well the facial expression, your dolphin drawing despite your great effort will not resemble much of a dolphin.

It is perfectly OK if you practice drawing only the head on a separate paper first. 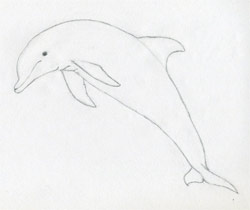 Gradually begin to erase all unnecessary and excess pencil clusters.

Draw a clear pencil line but not too strong in case you need to make some corrections that you will probably do. Outline the mouth opening and draw the eye.

Pay special attention to capturing a good balance of eyes and mouth. Now you have your dolphin drawing virtually ready.

The following is coloring. 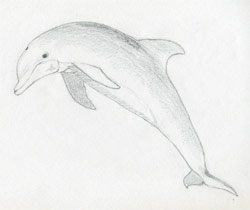 Hold your graphite pencil tilted and cover gently the body in grey. The opposite side pectoral flipper is dark (in the shade).

Mark out the blowhole on the dolphin’s head. Keep that in mind when you draw a dolphin or whale because these animals have blowholes. 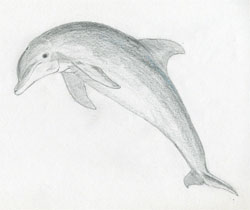 You can use also a grey colored pencil over the graphite pencil. It will create a good texture. 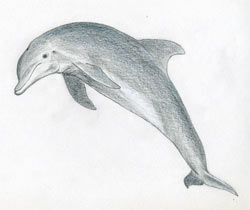 Finally, you can also add some – only very little and gentle touch – blue color over the basic grey layer.

Be careful when you shade the dolphin with blue color not to over saturate it.

Make a color-mixing test first on a separate paper or on the margin of your drawing sheet.

Did You Enjoy Drawing A Dolphin?