How To Draw Disney Characters

How to draw Disney Characters is probably one of the most wanted and most searching-after tutorials of all times. This is the real biggie in cartoon or animation industry. 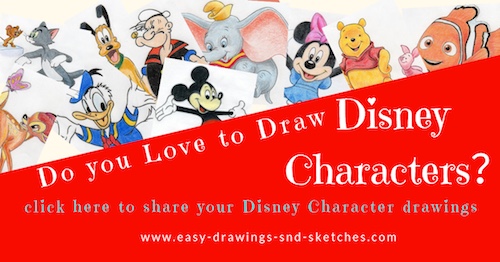 All Disney characters have real magic in their appearance. Nearly 100 years has passed since Walt Disney’s first version of Mickey Mouse starring as Steamboat Willie was born. BTW, did you know that the original name of Mickey Mouse was “Mortimer Mouse”?
Knowing how to draw Disney characters is probably a dream skill of many people regardless of age or gender. Would you agree?

I prepared step by step tutorials for drawing these cute characters. They are simple and very easy to follow. Every step in the drawing sequence starts from a very simple – almost grotesque – pencil lines and is gradually building up to its final shape.

Get a pencil and paper and just start drawing whichever character you like best. I can promise you, you will be truly amazed, once you realize how easy the drawing process is. Sure, you’ll make mistakes – which is perfectly natural and OK. Have an eraser handy to correct the wrong pencil strokes and just keep on sketching and drawing.

Everyone of us possesses different drawing skills. If your drawing skill is not yet trained as you would like to, it’s OK. Follow the step by step tutorial on this website and you will easily learn how to Draw Disney Characters, or any other stuff.

Drawing and sketching technique is basically the same in every tutorial. Birth of that very early version of Mickey Mouse was the beginning of something so huge that neither the author; Walt Disney himself could imagine that he was creating a brand-new animation history. Since then, generation after generation keeps loving Disney Characters.

What is the magic? I guess it is a mix of both; the original story and the characters. Why is it that kids are literally being hypnotized and attracted to Disney characters and animation movies like to a magnet?

Did you notice that many classic Disney animation movies consists of very positive and moral story? So, it’s only natural that we want to know how to draw Disney Characters. Disney stories are structured very simply and in the end the good always wins.

Life is based on the same principle that in a long run, the good always wins. The universe is designed that way.

Disney animation boom during 1940s and 1950s, tons of cartoons of every imaginable kind. An entire industry was created literally out of thin air by one great idea of Mr. Walt Disney.

One person’s imagination. Every big story always begins in a form of a dream of a one single person. Since then, generation after generation enjoyed watching Disney movies, reading Disney cartoons, etc.

Disneyland and Disney Sea is another impressive phenomenon. The idea of creating a theme park of this kind sometimes in early 1950s is just stunning. At the time many people must have been considering such idea as incomprehensible and almost heretic.

Now, we enjoy going to Disneyland time and again. The place must have some magical pulling power or gravity. While it is a big business it offers you an unforgettable experience.

I believe that one of the main reasons why so many of us love Disney stories and Disney original characters is because there is so much positive and uplifting stuff in them.

In today’s sadly aggressive and violent entertainment biz world, you see a Disney animation movie and hear such uplifting things like:

“No matter how your heart is grieving, if you keep on believing, the dream that you wish will come true.” – Cinderella


…such encouragement, giving you hope is so much needed on the planet Earth now.
Can you sense a totally different energy here? Very powerful.


“If you can’t say something nice, don’t say anything at all.” – Bambi

...a wise advice from Disney Character!

Now, you are here reading these lines and eager to learn to draw Disney characters. Why? There must be something special why everyone loves them.

Mickey Mouse or Winnie The Pooh appears printed on apparel design. Home accessories are made with Disney characters graphics, they are printed on kid’s shoes, hats and bags. Almost on anything you imagine.