This cute running cartoon dog is the second part of the how-to-draw cartoon dog series. If you’ve learned how to draw the first one then let’s begin drawing this running one.

Previous cartoon dog was just standing and smiling. It was pretty easy to sketch the outlines and complete the doggie’s body.

The running cartoon dog is a little bit more complex as you see.

Before you begin to draw observe the ready picture and try to just make a simulation in your mind of how would you begin drawing this running pose.

When you draw cartoons, you are allowed to draw slight inaccuracies because these mistakes just disappear or even better, they may add to the whole drawing an unexpected value.

Therefore you do not need to worry if your strokes are exactly the same as this drawing. Just take it easy, trust yourself and begin sketching the first outlines of running cartoon dog.

You can always RE-draw the picture, this is not a competition or exam, so relax :) No one is perfect, and no one expects you to be perfect either. 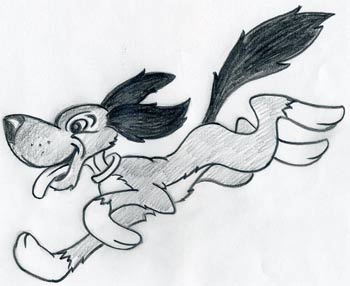 Now, let’s learn how to draw a dog in motion. This may look difficult, but in fact is very easy, as you’ll see below. 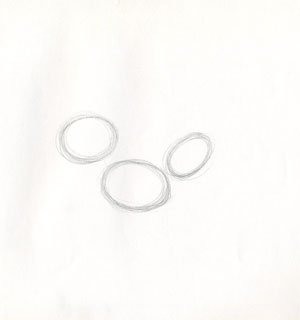 Draw three ellipses in the same position as in this picture.

One represents the dog’s head, the middle one is the body (belly), and the third one is in the back.

The size and position of these here ellipses will determine the size of your drawing. If this is your first cartoon dog drawing, then I recommend drawing them the same or very similar as in this picture. 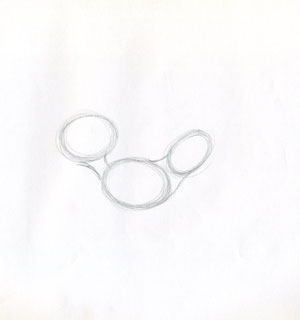 Join the ellipses with slightly curved lines. Notice that the space between the joining lines is different. The neck space is thinner, and the body space is thicker. 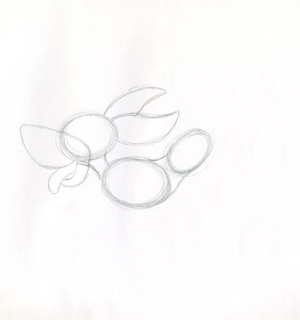 Draw the muzzle (mouth) part with the tongue out. Draw the ears. 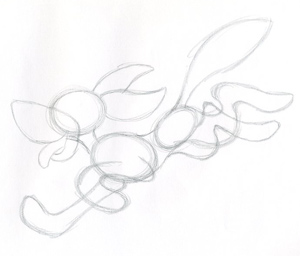 Draw the rest of the body parts, all four legs, and the tail. You’ll get a “transparent” - like drawing that looks like a ghost.
Here, you can clearly see how the structure of this drawing is made.

Now, draw two round circles on the head ellipse. The vertical one represents the guideline for centering the muzzle (mouth) part.

The horizontal guideline will help you to place the eye. Later you will be able to draw the eyes without guidelines.

Begin to erase all unnecessary lines so that you’ll get a clearer picture.

You see, learning how to draw cartoon dogs is not such a big deal. It is in fact very simple if you know the basic technique. Now you know it :) 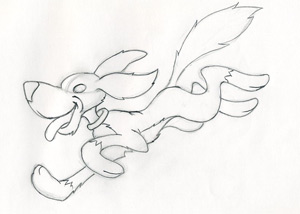 By softer pencil (B4 or B6) draw a clear outer contour.

Work out the eyes part, the iris and don’t forget to leave a small white dot in the middle of the iris. Darken the opened mouth. The tongue remains uncolored.

You have now a complete and clearly contoured cartoon dog. 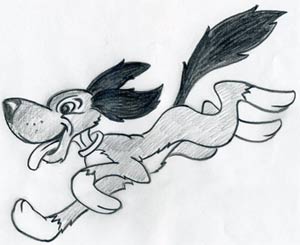 Now it’s time for coloring. I used only a B4 soft graphite pencil, but you can use color pencils and make it even better :)

Darken the ears, the tail, and the tip of the nose. Leave a small white spot so that it will look alive.

Slightly shade the whole body, leaving the paws and belly white. Your cartoon dog is ready :)