How to Draw Cartoon Hippo

Let’s learn how to draw cartoon hippo. Drawing these cute creatures is really a very easy process, as you will see in the following sequence.

The drawing tutorial below shows you how really simple and easy the drawing process is.

You will be able to draw this very quickly because the hippo’s body is really simple. Looks like a huge noodle walking on short legs. It's only a cartoon . 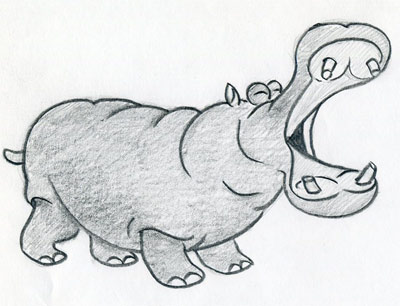 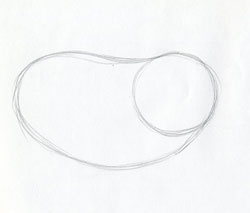 Draw a large been shaped thing – or noodle if you like and a smaller circle inside of it as you see in the picture.

The size of the noodle will determine the real size of your hippo’s body. 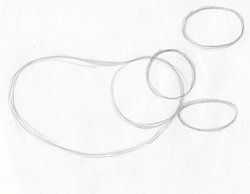 Next, draw another – smaller circle and two ellipses in the same position as you see in the picture.

The smaller circle is the hippo’s head and ellipses are the upper and lower part of the muzzle. 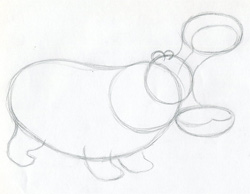 Draw the eyes – two small popping-out circles on the top of the head circle.

Join the muzzle ellipses as you see on the picture and outline the hippo’s lips – those are the half circles inside of ellipses.

Outline the contours of the legs. 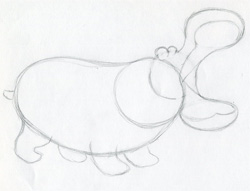 Draw the fourth leg…as you see I forgot to draw it on the previous step :) …

You can erase now a part of the head circle, the smaller one. Do it as you see on this drawing. Leave the large circle as it is because it helps you to point out the corner of the opened muzzle. 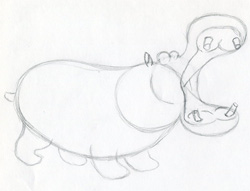 Here comes one of the most significant features: the teeth seen in the opened mouth. And your cartoon hippo is almost ready :)

Don’t forget to draw the tail too :) 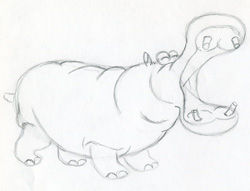 Hippos have a lot of fat and thick skin. So the skin then naturally creates many folds and wrinkles. Observe the picture and draw them.

Draw the nails on the hippo’s legs. 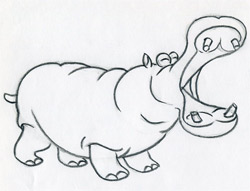 Use a softer B4 or B6 graphite pencil and outline the contours as you see in this picture. If you don’t have B4 or softer, then standard HB will do the job well too.

Erase all unnecessary pencil lines so that the picture will look very clear. From now on you can follow this tutorial or you can take your color pencils and color the hippo.

Except for the standard eraser I also recommend using a pencil-type-eraser. 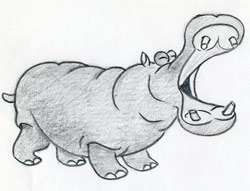 The last step is shading the whole body of the hippo.

Leave the space inside of the mouth brighter or even completely white. Also, the nails on the hippo’s legs are left uncolored or brighter than the rest of the body.

Did You Enjoy Drawing Cartoon Hippo?