How to Draw Spongebob

Wanted to know how to draw Spongebob Square Pants? You just landed on one of the best places to learn it in 6 simple and easy steps.

Drawing any anime characters is a perfect drawing lesson. Spongebob is just one such example especially if you are a beginner.

Yes, you know Spongebob well but now you are going to know him even better.

Because you are going to draw Spongebob.

You’ll be going to see him suddenly from a totally different perspective.

When you finish your drawing you will know him, I mean really know, because during the process you’ll have to observe such details which never even came to your attention before. 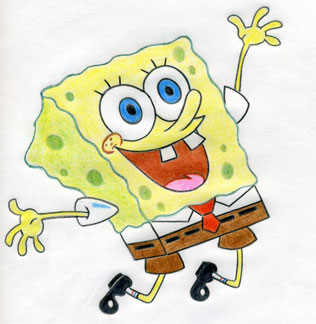 If you draw Spongebob the very first time, I would recommend enlarging this picture and printing it out. It will be much easier to draw than from the screen of your computer. 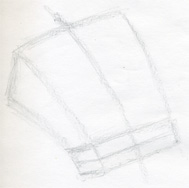 Draw an outline of the body. Do it by holding your pencil tilted, the lines will be wider, and the drawing process easier.

Notice the body pose of Spongebob. He is happy and jumping and his body bends backward.

His body is a rectangle but it is wider on the top. His hips are squared because he is Spongebob Squarepants ;-) 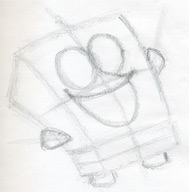 Draw two circles in the upper area. Notice that they intersect each other a little.

Draw the mouth exactly as you see it in the picture. Make as many pencil lines as you want, you can always erase them later. The point is to capture the shape.

Draw the sleeves of Spongebob’s shirt, pants and you can slightly mark out his arms. Note the detail, that the sleeves are cone-shaped. 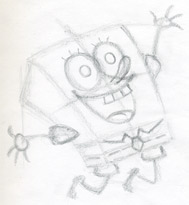 Draw two smaller circles into his eyes. On the top of each eye, draw 3 thick eyelashes.

Nose. Instead of describing how to draw it, just see that his nose is bent and covers the lower part of his eye.

Draw two buckteeth and the tongue.

Now you can sketch his hands just by simple pencil lines, yes draw as many lines as you feel necessary. His palms are opened up.

The point here is, to capture the direction and the curves of his fingers.

See how I extended a help-line from the corners of his head to catch the right position of his palms.

Draw the collar of his shirt, the necktie, and the belt in his square pants.

Legs. I think this is easy and need not any special explanation. The point is: to capture and draw the shoes - the same size. 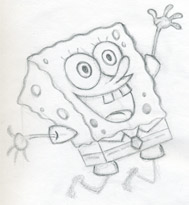 It is time to start to erase the excess pencil lines and draw more exact body outlines.

Draw the shape of the hands, fingers, and legs. Always follow the sketches of the limbs you made in the previous step.

Spongebob’s body should look spongy. Draw bumpy lines over the edges of the initial body contours so it gives an impression of spongy texture.

Also, add some sponge-holes here and there on his face and on side of the body. 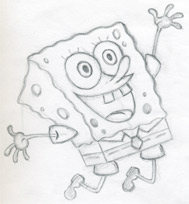 At this stage you have your Spongebob drawing virtually ready. 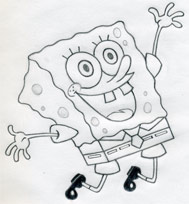 The last step is to completely erase all unnecessary dust and unnecessary pencil lines so the Spongebob will beautifully come up, smile, and jump!

Very Good! Now you know how to draw Spongebob Squarepants!

Your work is now a perfect base for the coloring page. 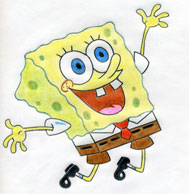 Here I just very quickly colored the Spongebob with color pencils, but I am sure you can do it much better ;-)